You are here: Home1 / Insights2 / A Case Study on Commodity Demand 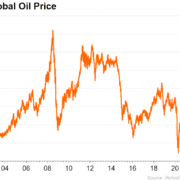 The words ‘this time is different’ are often referred to as the four most fatal words in investing. What seems new and fresh may lead many to conclude that different rules should apply.

Commodities are often considered to be cyclical in nature. If demand is higher than the current supply, then the price goes up until it reaches a level where investors have incentive to drill or mine for new supply. If too much money is invested in any one commodity this results in over supply, the price drops and investment in new capacity goes away, sometimes seemingly overnight.

This time, the world has changed and the pressure for a low carbon economy is restricting companies from reinvesting in their business and investors are reluctant to put up money for new projects. If oil and gas executives and investors don’t have clarity on where the industry will be ten years from now, then money doesn’t get invested to meet current demand.

This is a very new situation where instead of prices rising to where new supply comes on, rather prices will rise until many people stop using the commodity. People will drive less or travel less or buy one car instead of two. While cars may be optional for some consumers, a similar scenario is happening in the food supply chain and that is a very serious concern.

In the very near term, this is a recipe for sustained higher prices in most commodities. And a Western ban of Russian commodity supplies will only make the situation worse.