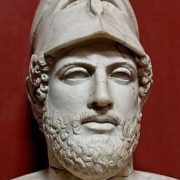 This famous quote from Pericles was made in the context of readying the Athenian people for the unpredictability of war. During the last two months we are witnessing what seems like a throwback to a past where despots were intent on brutal conquest. This behaviour seems completely irrational within our globally integrated world of business and finance.

At this point in early April, we don’t know how long the conflict in Ukraine will last and we can’t predict the outcome. This is the point Pericles is making: the future is always unpredictable. The investment industry attempts to forecast the level of an interest rate or the price of a stock in six months’ time, but really there is not any way to know for certain. We need to focus on being prepared for whatever environment we find ourselves in.

In our last quarterly letter, we described a tapering pandemic and how we have positioned our portfolio for a very complicated economic recovery. Excess money and gummed up supply chains have resulted in surging inflation. Adding a war in Ukraine is a completely different geopolitical challenge, but it exacerbates the same investment themes exposed by the pandemic. In summary, our investments remain oriented towards businesses who can maintain pricing power and we are avoiding businesses where margins are at risk of shrinking.

Geopolitical events usually affect bond and stock prices in the short-run, but the long-term prices are much more affected by major financial and economic trends. We have adjusted the portfolio for a financial system where liquidity is now declining and a global economy is contracting.

Only a few months ago, we wrote that asset markets would change if interest rates rose above 2%. Central banks have only just started to increase short term lending rates, but it is expected that short term rates will be 2.5-2.75% by this time next year. Subsequently, we have seen a sell-off in bonds and a real shift by stock market investors from growth stocks to more stable businesses of the type we like at Avenue.

In the face of the highest inflation in decades and rising interest rates, Avenue’s bond portfolio remains defensive. We have a higher cash weighting and our bonds have a shorter average term to maturity. From a long-term compounding point of view, higher interest rates are always better. It was going to be very hard to get a reasonable rate of return when interest rates were so low. We believe that in the next few weeks or months interest rates will reach a level where we can invest our cash and reinvest as our bonds mature, at much better rates.

What we don’t know is how much central banks will actually move interest rates to combat inflation. Even though the market is anticipating 2.5% to 2.75% interest rates next year, this has not happened yet, and a lot can occur over the course of a year. One of the indicators of economic health is what is called the shape of the yield curve. When we put all the current interest rates on the same chart (3-month, 2-year, 5-year, 10-year and 30-year interest rates), we look at what the relationship is between the interest rates over the different time periods.

Currently, the yield curve in Canada and the US is unusually flat. The consensus of many investors is that they anticipate short term interest rates will have to go up to a level where inflation is contained. This is a polite way of saying our central banks will have to raise rates to a level that creates an economic slowdown. This in turn, is keeping the longer maturities like the 10-year bond interest rate from going up because investors are anticipating a recession. As the year progresses the shape of the yield curve will give an indication of how big a future slowdown might be.

Declining liquidity will be a continuing theme throughout 2022. Interest rates are going up. Central banks will not be buying their own bonds, which is now being referred to in financial language as quantitative tightening. As well, direct Covid subsidy cheques are no longer being handed out.

We are already seeing indicators that point to much less liquidity in the financial system. There has also been a commensurate amount of damage in the high valuation growth stocks as the market digests this information.

For example, last November the e-commerce stock Shopify was the largest company in Canada with a valuation of $275 billion, compared to the next largest which was Royal Bank valued at $190 billion. Shopify in now down 70% in just the last four months.

At the beginning of the year, we were nervous that the entire stock market was vulnerable to a price decline. But what we have experienced is investors shifting from high valuation growth stocks like Shopify to more traditional stable businesses like Bell Canada. Avenue’s equity portfolio has held up well given the repositioning we did last year with the view that certain traditional businesses are able to cope with inflation better than others.

Global supply chains remain a problem. China is still locking down major cities and ports. Shipping is getting easier but that might be because there is less to ship. We are seeing signs in North America that trucking is slowing. This could be an indicator that the overall economy is not as strong as investors are expecting and we should be cautious.

A Cold War II scenario is a much bigger and longer lasting risk affecting investing. It appears just-in-time inventory management on a global scale will contract to a level more typical of previous decades. Russia is a source of raw material and China is the global supplier of manufactured goods. What is being called reshoring, bringing back manufacturing to North America and Europe, will have a negative impact on economic growth and the margins of many businesses.

To give some perspective, during the height of the Cold War in the early 1970s, the Global population was 3.5 billion people. However, due to the constraints of the Iron Curtain and China’s cultural revolution there were only about 1 billion people participating in what we describe as the Western economy.

Globalization exploded shortly after the fall of the Berlin Wall in November of 1989. Today, the global population is closing in on 8 billion people. But what is significant is that it is estimated that about 5 billion people now participate in the global economy. This is a 500% increase in the global participation rate in just 30 years and all the prosperity that goes along with open trade. Now, businesses are facing higher costs with less supply availability and less efficiency. As investors, these are very important points to study when we consider where to put our money.

What Is a Tail Hedge Strategy?

A Case Study on Commodity Demand
Scroll to top